10. Paul Simon – Stranger to Stranger
Here’s Simon not only experimenting with his sound again, but sounding like he’s having a blast doing it. Full of complex rhythms which never crowd the music, Stranger to Stranger is a welcome return to story telling and humorous character study. Let’s hope he’s finally loosened up in his old age.

Favorite songs: “The Werewolf,” “Wristband,” “In a Parade” 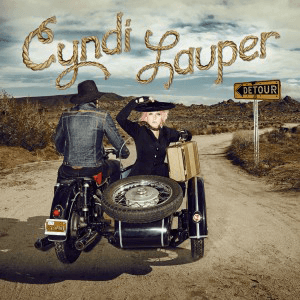 9. Cyndi Lauper – Detour
Cyndi’s love of music truly shows in her attempts to expand past her quirky pop/dance collections. Detour attempts to channel old-school 50’s & 60’s country through a contemporary filter. While one or two songs don’t quite make the cut (seriously, just skip the horrendously strained attempted humor that is her duet with Vince Gill), the rest more than make up in the pure joy and emotion she pours into the collection.

Favorite songs: “Detour,” “Walkin’ After Midnight,” “Heartache by the Numbers”

8. Carly Rae Jepsen – E•MO•TION: Side B
My love for all things E•MO•TION continues. Last year’s awesome pop album would have definitely made my top 3 last year had I just given the chance at the time. Then suddenly Carly says, “Oh, hey! I have more from those sessions!” and I’m all like, “No way they you have more quality tracks after the 14 pop gems you gave us before,” and she’s all like, “Bitch, please. BAM!” Well, Imaginary Carly was right. Eight more delicious, catchy-as-all-get-out tracks that continue her criminally overlooked bubble-gum concoction.

7. M83 – Junk
Finally an M83 album caught my attention. I’ve attempted and failed on numerous occasions to find myself lost in Anthony Gonzalez’s music until he went nostalgic. Junk has him wearing his 80’s love on his record sleeve. Hell, “Moon Crystal” actually sounds like an 80’s TV theme this stuff is so throw back. While there are some overly sentimental tracks, the remainder is sing-along good. Tracks like “Do It, Try It,” “Bibi the Dog,” and “Go!” are toe-tapping goodness. Even Beck gets into the act with the melancholy fun of “Time Wind” near the end of the collection. It’s dangerous naming music junk, but there is very little of it in Gonzalez’s memory banks.

6. Chairlift – Moth
I’ll admit this is my first exposure to Chairlift who have been around since 2005 and were formed 30 miles away, but one listen to the amazing chorus of “Romeo” and I was hooked. From there I discovered an album full of pop being twisted to this duo’s vision. “Polymorphing” is an experiment in R&B, jazz, and electronics yet somehow sounds a pop song as a whole, while “Ch-Ching” sounds like a fleshed-out demo for Beyonce which wouldn’t be surprising since Caroline has a song writing and production credit on Beyoncé. The other uptempo songs (“Show U Off” is a near-perfect love song) and one of the ballads demonstrate this team’s ability to create energetic, interesting music that entices multiple listens.

5. Pet Shop Boys – Super
There’s much more country in this year’s list than in the past. Why do I bring this up during a Pet Shop Boys review? Start up Super and you’ll hear “Happiness” — which sounds like a continuation of their incredible Electric from 2013. Then the chorus hits. Suddenly, you’re on the soundstage of 1950’s western sitting around a campfire while the Boys plan all dressed up in cowboy drag. While this is really the only surprise Super offers up, it’s still a solid pop album with only a couple of clunkers. The Boys are planning a Stuart Price-produced trilogy with Electric feeling like a night out at the club, Super being the pop-song collection, and a ballad album coming soon. It’s amazing 35 years into their career they are still producing quality music.

4. DUST – Agony Planet
Welcome to Agony Planet. A harsh, dangerous place where only the bravest, thrill-seeking ravers go to party. Outside is a world filled with hostile aliens and wastelands of acid pools. Inside is a huge compound filled with dance music so menacing, you wonder if it’s meant to party or to warn — which is the reason Agony Planet is on this list. DUST does an amazing job of taking a house and techno – genres filled with repetitive beats and hooks — then creating a sci-fi horror techno rave soundtrack around them. Only a few songs have vocals (by a woman named Greem Jellyfish), but those are the songs where the horror and madness are most visceral. Making Agony Planet not quite like any dance record on Earth. Meanwhile, inside the club, something sinister is about to be born unbeknownst to those lost in the music…

Favorite songs: “Breeding Pit,” “Xenocide,” “Tell Me,” “She Woke Up in Water”

3. Sturgill Simpson – A Sailor’s Guide to Earth
While it can be argued quite easily the Grammys aren’t relevant, it it nice to see an relatively unknown artist included in the popularity contest. Sturgill’s surprise Album of the Year nomination caps a year of him flat out telling Nashville they have been releasing drivel for the past two decades and garnering accolades from those very people he criticized. A Sailor’s Guide to Earth is his advice-riddled love letter to his new born son and it’s a whopper of humor, genre-blending, and meditation on being a new father. He has a beautiful, traditional country voice: deep and pleasant as it rides waves of interesting musical arrangements. “Welcome to Earth (Pollywog)” starts out a traditional country song brings in some pretty strings and then — half way through the song — breaks out the amazing Dap-Kings R&B horn section. He even uses washes of electric keyboards throughout. It works beautifully. The best songs are full of humor (“Keep It Between the Lines”) or go against the traditional country music topics (“Call to Arms”), but the writing is strong here. He even throws a Nirvana cover (“In Bloom”) smack dap in the middle. It’s a low-key affair which has its meaning changed by the album’s subject matter. The line “He’s the one who likes/ All our pretty songs/And he likes to sing along…” could easily be a hopeful sentiment that his first born will enjoy his daddy’s work. “A Sailor’s Guide…” won’t win the album Grammy, but the attention is enough and hopefully will bring many more listeners to this amazing work.

Favorite songs: “Welcome to Earth (Pollywog),” “Keep It Between the Lines,” “Sea Stories,” “Brace for Impact (Live a Little)”

2. David Bowie – Blackstar
Seriously, what is left to say about Bowie’s final gift to those of us bound to this earthly realm? Even before his death two days later, I had played the thing multiple times completely impressed that a man this far into this career and his life was still pushing boundaries and experimenting with sonic palette. Stuffed full with — in hindsight — meaningful imagery of death and rebirth, the beauty of Blackstar is its accessibility. Yes, it’s weird with all the space jazz going on, but never once does Bowie forgot the hooks. He still wants his music flowing into ears with many gorgeous melodies riding the freaky arrangements. Whether it’s the cult-infusion of “Blackstar,” the A Clockwork Orange vernacular in the lyrics of “Girl Loves Me,” or the earnestly frank “I Can’t Give Everything Away,” Bowie’s swan song ranks up there on equal footing of his 70’s output. The world needed David Bowie except we had forgotten. Blackstar reminded us.

Favorite songs: “Blackstar,” “‘Tis a Pity She Was a Whore,” “Girl Loves Me,” “I Can’t Give Everything Away”